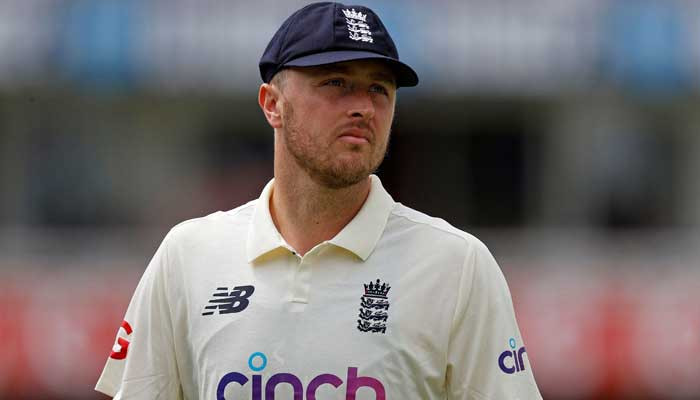 LONDON: Ollie Robinson will miss next week’s second Test against New Zealand at Edgbaston after being suspended from all international cricket pending an investigation into racist and sexist Twitter messages, the England and Wales Cricket Board (ECB) announced Sunday.

But his efforts with bat and ball were overshadowed by the re-emergence of racist and sexist social media messages the 27-year-old had posted as a teenager in 2012 and 2013.

“England and Sussex bowler Ollie Robinson has been suspended from all international cricket pending the outcome of a disciplinary investigation following historic tweets he posted in 2012 and 2013,” said an ECB statement.

“He will not be available for selection for the LV= Insurance second Test against New Zealand starting at Edgbaston on Thursday 10 June.

“Robinson will leave the England camp immediately and return to his county,” it added.

The paceman led England’s attack with 4-75 in the first innings at Lord’s and followed up with 3-26 in the second while in between making a useful 42 with the bat.

But he found himself making an unreserved apology after stumps on Wednesday, his first day in Test cricket, for tweets that included comments suggesting Muslim people were linked to terrorism, and derogatory remarks about women and people of Asian heritage.

His messages re-emerged after both teams lined up before play on Wednesday for a ‘Moment of Unity’ designed to show their opposition to discrimination, with England wearing T-shirts stating ‘Cricket is a game for everyone’.

Robinson, in a statement issued after play on Wednesday, said he was “embarrassed” and “ashamed” by the posts.

“I want to make it clear that I’m not racist and I’m not sexist,” he added.

England captain Joe Root speaking after stumps on Sunday but before Robinson’s suspension had been announced, said of the tweets: “I couldn’t believe them, personally.”

Root, however, added Robinson had shown a “lot of remorse” that was “very genuine”.

Turning to Robinson’s first match as a Test cricketer, on the field at Lord’s, the skipper said: “He has had an exceptional debut…He’s showed high levels of skill and he’s definitely got the game that can be successful in Test cricket.”

Root, however, insisted: “In regards to the stuff that’s happened off the field, it’s not acceptable within our game. We all know that.”

As for suggestions that the ECB should have investigated Robinson’s social media history prior to his England debut, Root said: “We can look back about how this could have been handled better, but the fact is it shouldn’t have happened.

“And if we continue to keep trying to better the game right now, then in years to come this shouldn’t be an issue.

“We’ve got to move forward from this, learn from this and do everything we can to make sure it doesn’t happen again.”

Robinson has a separate employment contract with Sussex so he is free to play, if selected, for the south coast county during his international suspension.

New Zealand to go to Pakistan after 18 years